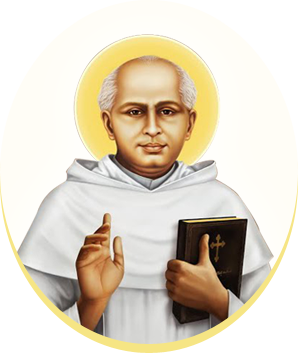 
Our lodestar is St. Kuriakose Elias Chavara (1805-1871), the founder of the CMI, the first indigenous religious congregation in India.

Kuriakose (Cyriac) Chavara was born on 10th February 1805 of pious and devout Catholic parents of the Syro-Malabar Church, at Kainakary, Kerala, India. After his early schooling in the native village and priestly studies under Fr. Thomas Palackal at Pallippuram, he was ordained priest on 29th November 1829.

In 1831, co-operating with Fr. Thomas Palackal and Fr. Thomas Porukara, he founded the first indigenous religious congregation for men, now known as the Carmelites of Mary Immaculate (CMI). It was after the death of his senior companions in the foundation that Fr. Kuriakose, together with the first members, made the religious profession on 8th December 1855. In religion he took the name, Kuriakose Elias of the Holy Family. Fr. Chavara has written a number of books in prose as well as in verse with unique spiritual vision. His counsel to the Christian families given in the form of the “Testament of a Loving Father” is applicable and relevant to this day. Essentially a man of prayer and intense charity, he lived in close communion with the Lord amidst his several religious and social activities. Owing to his deep spirituality that permeated all his actions, he was accepted and referred to as a man of God, from his early years.

In 1871, on January 3rd, Fr. Kuriakose Elias Chavara, after a short but painful illness, passed away at Koonammavu preserving his baptismal innocence unto death. His mortal remains were transferred from Koonammavu to Mannanam in 1889 and interred in St. Joseph’s Monastery Church.

The Blessed Kuriakose Elias Chavara was a torch that shone its way in the wilderness and darkness of nineteenth century Kerala society. Under the searing light of his vision, the social and educational map of Kerala changed for ever. We, at Devagiri CMI Public School, draw guidance from Father Chavara.

There is much that can be said about him. He distinguished himself as a social reformer and educationist. He produced a huge amount of written work on various topics. He was not a preacher-priest but a doer-priest. He heralded changes in the educational scenario of Kerala by starting, in 1844, the first free Sanskrit school which was open to all, irrespective of caste or creed. To him, also goes the credit of starting a primary school, the first of its kind, in Mannannam, Kottayam, Kerala . Under his guidance each church in Kerala had a school attached to it. When he was appointed the Vicar General of the Syrian Catholics he was instrumental in starting schools attached to monasteries and parish churches. The CMI congregation has a large network of 510 educational institutions ranging from play schools to medical colleges and engineering colleges, spread all over the world.

Let us try and get to know the persona of Father Chavara. He was a true son of the church, a saint with a universal vision but yet one who never lost his baptismal innocence. A leader who was gentle but firm. He was not St. Cyril of Alexandria who pitted forces against Patriarch Nestrius nor was he St. Thomas Becket standing his ground against the Church of England. He defended the church and stood by its teachings, not in an arrogant, haughty way, but with humility and tact. A man who befriended everyone and and was hostile to none. Like Midas he turned into gold everything he touched and in fact there was nothing he didn’t turn his hand to.

He was indefatigable. What was the source of his boundless energy? Referring to the the secret of Chavara’s success, Pope John Paul II on the occasion of his beatification ceremony at Kottayam on February 08, 1986, observed that his success in all that he did was undoubtedly due to the intense charity and prayer which permeated his daily life. Former President of India R.Venkataraman on the occasion of the release of the commemorative stamp on December 20, 1987 described Father Chavara as the “epitome of Indian Christianity at its best and the Malabar church at its most resplendent”.

It is more than a century and a half since Father Chavara left us. We have moved on. Society has changed a lot. Yet, he continues to inspire all those who yearn to make the world a better place to live in.